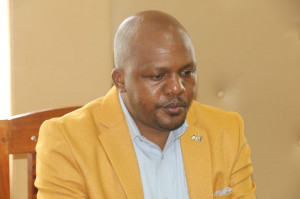 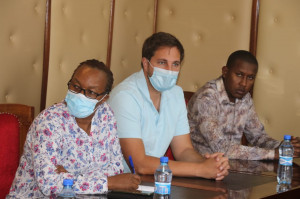 United Nations Development Programme (UNDP) through Africa Borderlands Center, together with The Swedish embassy, visited UNDP funded Nasal Water Project and alternative livelihoods programmes in Alale Ward, West Pokot County. This was part of programmes initiated for communities along the Karamoja cluster following the signing of an agreement between UNPD and The government of Sweden in October 2021.

The programme funded by The Swedish government, dubbed Cross-Border Sustainable Peace and Development, seeks to end hostilities among the three neighbouring communities namely; Pokot, Turkana and Karamoja. In addition, it aims to improve the wellbeing of communities by averting conflicts and improving their socio-economic status. This will subsequently, assist in transforming the border region from a conflict-prone zone to an area of progress, development and wealth.

Led by and Dan Juma and Martha Mathenge from UNDP Kenya among other representatives from UNDP-ABC, Department for ASALs, NDMA and the County Government of West Pokot, the team visited projects in Alale, Kodich and Kacheliba where Nasal community and 25 groups drawn from North Pokot were beneficiaries of 6 posho mills, 52 bee-hives, 32 galla goats, four bulls and water pumps. The Nasal Water Project which has been implemented is serving more than 4,000 households, 12,000 livestock as well Nasal primary and dispensary.

Speaking during the visit, Dan Juma who’s the team leader for Governance and Inclusive Growth at UNDP Kenya, highlighted on the progress being made in the region, saying that there is still a huge potential for sustainable development. He also noted that, with collaboration and intercommunal engagements, the communities will be able to achieve peace and prosperity.

“Our work is to complement government’s work by looking at sustainable development in borderlands from a holistic approach to end insecurity and eliminate poverty and realize transcending foundations of peace,” said Mr. Juma.

Representing the Swedish Embassy, Ms. Emma Sandahi said that The government of Sweden is committed to working with counties and peace to, not only accelerate sustainable development, but most importantly find lasting peace in the borderlands of Kenya and Uganda.

“There is a huge development momentum between Kenya and Uganda, and we encourage the county to work closely with UNDP-ABC to find areas of collaboration in the borderlands for peace and development,” pointed Ms. Sandahi.

Later on while on a courtesy call at the county headquarters in Kapenguria, the county government of West Pokot and United Nations Development Programme (UNDP)-ABC, further held deliberations on implementation of the joint peace and sustainable development programme for Pokot-Turkana-Karamoja cluster region.

Speaking of behalf of the governor, Chief of Staff Mr. Powon Kapello hailed the initiative saying that the county government of West Pokot is fully committed to working with partners and communities to implement the cross-border projects. Moreover, he said that development along the Kenya-Ugandan border has long been curtailed by insecurity due to scarcity of resources, pointing out that the programmes being implemented along the borderlands will in the long run transform livelihoods.

Director for Trade and Investment for West Pokot County Mr. William Ntoina expressed his appreciation of the support from UNDP, The Swedish Embassy, Africa Borderlands Center, and Department of ASALs among other partners for their continued support to the Pokot people and its neighbours. He mentioned the tremendous impact being felt in the region, noting that continued partnership between the county and UNDP-ABC with Swedish government support, will leave a mark in the borderlands.

His sentiments were echoed by Monica Marko who is the chairlady for Chomyogh women group in Kitelakapel who emphasized on the importance of the programme, saying that her community’s is benefiting from the maize mill they received.

“Initially, we had to walk long distances to find a place we could get posho mill, but currently, my community doesn’t have to do that at the moment. We also have a source of income as a group and we plan on further improving our livelihoods going forward.”

As part of its overall agenda to improve security in Pokot-Turkana-Karamoja borders, the county government of West Pokot has established 6 peace border schools that will play a key role in achieving peace and providing a better access to quality education.

Present were Florence Bett from The Department of ASALs, Kristoffer Tangri and Wako Halkano from UNDP-ABC, Martha Mathenge from UNDP-Kenya, Michael Kimithi from NDMA and officials from the county.